Anikiko, Tessabella & Co and ShineInc Co is proud to present

“What is your super force? We are the force!”
Anikiko will be showcasing her tracks from her album ‘Particles of Goodness’ showcasing her recent tracks co-written with talented Dj’s and producers in the music industries.

Be a witness to these talented artists and Djs who will create Superforce like no other! Unleash your force within you to a fun night at Crystal Bar with amazing performers bringing the best of house music…a history in the making!

“Background”
Anikiko is a producer, writer and singer. Her latest Album “Particles of Goodness” features ARIA winners as well as producers and DJ’s she has worked with over the years. Her performances include Sydney’s Top level iconic venues and patrons like Bon Jovi. A winner of NSAI writer competitions, Songwriter of the year (2013) in USA “Song Of The Year” Competition, in dance/electronic genre – Top 5 Song Of The Year Competition, Top 5 Music Oz awards 2012 nominations, several compilation CD’s in Japan and Australia, Film clip GOLD Winner of ACS 2010 awards, Broadjam top 10 Australian artist and International Song Writing ISC finalist of 16, 000 entries 2 years in a row and co-written songs with the Djs and producers of The Potbelleez. Anikiko shows a diversity and style that is like no other, drenched with uniqueness.

Anikiko is a major presence in the Australian holistic health movement which has created a large number of fans in that market. Moving effortlessly from an intimate echoing and haunting sound that can hear a pin drop in a hall, to jump up and down remix tracks, Anikiko takes audiences on a journey unlike any other.

Be part of this amazing journey as Anikiko travels globally and make history in the music industry!

We have reserved and pre-SOLD tickets already, so get yours now.

Free drinks and canapés on arrival

TO BUY YOUR TICKETS CLICK ON THE LOGO BELOW

Doors open at 7pm- ID MUST BE PRESENTED 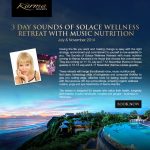 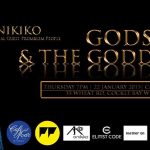